This is a blog post dedicated to white gun owners who quiver in fear that any kind of gun control laws, no matter how meek and mild, might be implemented.

Your fears may soon be coming to fruition! And to explain why, first let me start with this slightly dated clip from The Daily Show:

In the above video, I learned something mind-blowing:

In fact, even prior to the Panthers’ visit to the State Capitol building, their armed presence was gearing up Republicans for a battle against guns:

In February of 1967, Oakland police officers stopped a car carrying Newton, Seale, and several other Panthers with rifles and handguns. When one officer asked to see one of the guns, Newton refused. “I don’t have to give you anything but my identification, name, and address,” he insisted. This, too, he had learned in law school.

“Who in the hell do you think you are?” an officer responded.

“Who in the hell do you think you are?,” Newton replied indignantly. He told the officer that he and his friends had a legal right to have their firearms.

Newton got out of the car, still holding his rifle.

“What are you going to do with that gun?” asked one of the stunned policemen.

“What are you going to do with your gun?,” Newton replied.

By this time, the scene had drawn a crowd of onlookers. An officer told the bystanders to move on, but Newton shouted at them to stay. California law, he yelled, gave civilians a right to observe a police officer making an arrest, so long as they didn’t interfere. Newton played it up for the crowd. In a loud voice, he told the police officers, “If you try to shoot at me or if you try to take this gun, I’m going to shoot back at you, swine.” Although normally a black man with Newton’s attitude would quickly find himself handcuffed in the back of a police car, enough people had gathered on the street to discourage the officers from doing anything rash. Because they hadn’t committed any crime, the Panthers were allowed to go on their way.

The people who’d witnessed the scene were dumbstruck. Not even Bobby Seale could believe it. Right then, he said, he knew that Newton was the “baddest motherfucker in the world.” Newton’s message was clear: “The gun is where it’s at and about and in.” After the February incident, the Panthers began a regular practice of policing the police. Thanks to an army of new recruits inspired to join up when they heard about Newton’s bravado, groups of armed Panthers would drive around following police cars. When the police stopped a black person, the Panthers would stand off to the side and shout out legal advice.

Don Mulford, a conservative Republican state assemblyman from Alameda County, which includes Oakland, was determined to end the Panthers’ police patrols. To disarm the Panthers, he proposed a law that would prohibit the carrying of a loaded weapon in any California city. When Newton found out about this, he told Seale, “You know what we’re going to do? We’re going to the Capitol.” Seale was incredulous. “The Capitol?” Newton explained: “Mulford’s there, and they’re trying to pass a law against our guns, and we’re going to the Capitol steps.” Newton’s plan was to take a select group of Panthers “loaded down to the gills,” to send a message to California lawmakers about the group’s opposition to any new gun control.

The Panthers’ methods provoked an immediate backlash. The day of their statehouse protest, lawmakers said the incident would speed enactment of Mulford’s gun-control proposal. Mulford himself pledged to make his bill even tougher.

So yeah, the precedent is clear. If Republicans like guns now, all we need to do change their minds is convince a lot of African-Americans to collect together a bunch of licensed handguns and big scary rifles and shotguns. Hopefully we can get them to follow the cops around and stand near capitol buildings while publicly brandishing their guns. The panthers did it with, like, 20 guys, so it will only really take a small push even now. Within months or weeks, there’ll be a huge anti-gun-rights backlash the likes of which would make even Trump turn pale.

Despite what racists would have you believe, only half as many black folks are currently armed when compared to whites. If/when that changes, the NRA will either have to stop being an organization dedicated to selling more guns for the Gun Lobby and return to its roots as an advocate for hunters and sportsmen’s safety, or it will die. The ranks of its membership could easily dwindle when many whites, who now won’t let go of their guns until pried from their cold, dead hands, will now be saying that gun rights go too far. Whites have done it after the Civil War, during the Reconstruction, during the late 60s, and any time that blacks made motions towards enjoying their 2nd Amendment rights.

That’s not to say that similar gains towards sensible gun control couldn’t be made if American citizens of, say, Hispanic or Middle Eastern or Native American descent don’t also get a mess o’ guns. But white America loves to oppress African-Americans more than just about anybody, maybe even more than trans people. 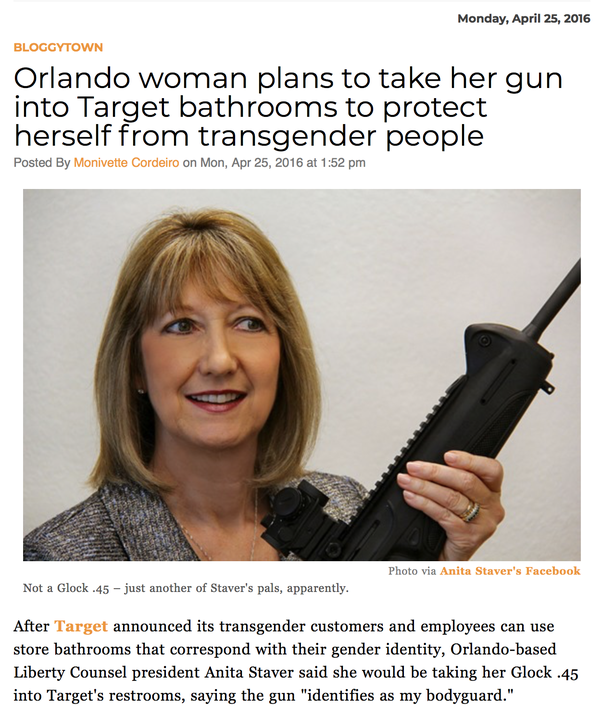 Oh my god, can you imagine if more trans women get armed? The gun lovers are already scared to death of them, and clearly aren’t interested in a fair fight, if women like this one exist.

But imagine if trans women could shoot back? 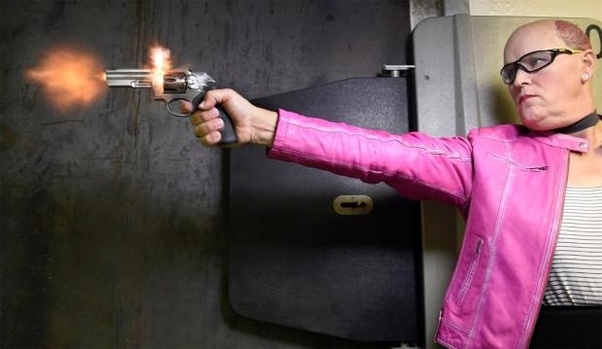 No, I tells ya, the right’s dedication to gun rights is as flimsy as its rationales for why it’s not racist or transphobic. Once we arm the minorities they fear, and white gun owners can experience the same actual terror of loss of life that minorities feel when huge white dudes with concealed weapons are chomping at the bit to shoot them all the time, they’ll happily compromise on gun safety.

Don’t believe me? We’ve already seen, in Stand Your Ground laws, that in states with such laws the percentage of white on black shootings that are considered justified shoots way up, proving that whites don’t think that gun rights are okay for blacks in the same way that they do to whites.

And in the courts, that can be arranged. But when it comes to blacks brandishing guns in public places, not committing crimes but merely scaring the fuck out of racists by proudly holding their guns aloft, that won’t be decided in the court of law, but in the court of public opinion. There’ll be no way for courts to secretly segregate that fear into nonexistence. Unless gun restrictions could only be implemented on black people and not on white people (and I have no doubt that will be tried), white gun lovers will soon be begging for gun control laws to take guns away from the scary black folks, even at the risk of some of their own unbridled freedoms.

So if you love your guns to the point of insanity, and think any move towards gun control is a move towards tyranny, you better hope and pray that African-Americans don’t start exercising the power they already have in this arena.

Sadly for you, it’s already starting.

“I used to worry about what people thought of me as a black man,” says Amoah, the president of the 761st Gun Club of Illinois. As a gun-carrier, he says, “Now, I just don’t care anymore.”

1 thought on “Will the NRA and Gun Rights Activists lose a major portion of white voters and Republican politicians if blacks become armed?”