I’ll tell you one thing friends… you know that whole “sexuality is on a scale” argument, with one side being straight and one side being gay and many people falling somewhere between those two poles?

Well, actually being bisexual, pansexual, polysexual, sexually fluid, or any of the other terms under that umbrella kind of makes you feel like that whole concept of a “scale” is a crock of shit.

Consider this traditional Kinsey Scale, where supposedly all people fall. As the theory goes, they may fall on different parts of it at different times, but anyone who’s not an Ace should be here:

If you’ve ever been a serious “enthusiast” of the bisexual lifestyle, you can already probably see the flaws:

And no answer to any of the above would really make a scale work, because all of these factors are at play in sexuality.

There’s also an argument to be made to include a Y factor of “attraction type” that runs from asexuality to hypersexuality, which I think is a slight improvement that still doesn’t fix the fundamental flaw in the methodology (but that’s a topic for another time).

I’ll use myself as an example to illustrate how the scale doesn’t quite work (turn away now if you don’t like frank sex talk):

There’s not really the concept of “in the middle” when you have attractions that are all over the map. This came up yesterday when I was answering a fun little question on Quora: On a scale of ‘Freddie Mercury getting a piggy back ride from Darth Vader, whilst singing with Elton John and Neil Patrick Harris, during Pride, while it’s raining skittles’ to ‘No way bro’. How gay are you?

Instead of plotting myself on that chart, I ended up making an alternate one, a scatter chart, which I think was a better way of illustrating where I’m coming from. This was kind of a proof of concept/joke, so take the scatterings with a grain of pink Himalayan sea salt. But it is true that I have attractions, and have had sexual hookups or relationships or gone on dates, in multiple places that could be pinned into an X/Y grid, with significant groupings in at least two very different spots on that grid, and probably more: 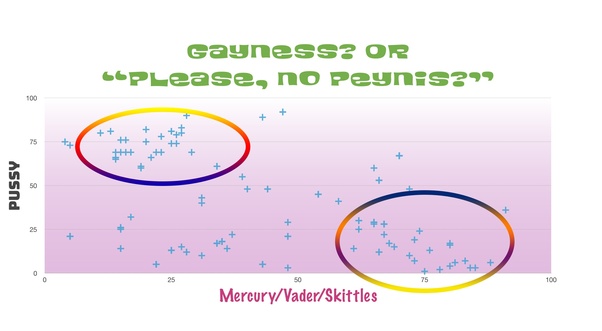 “That is a really beautiful chart! Your font use is not distracting at all!”

“hey, I consider myself straight or gay, not bi. And even I could have a scatter chart like this, albeit with most dots in one section closer to one edge or another. Are you trying to argue that everyone is on the grid, just like Kinsey said with his scale?”

Well, that part I don’t know. Though I love how you used the word “albeit” in your question just now, I’m stuck being me, and can’t see into your head or anyone else’s. While it seems to me like people who are not willing to explore their sexual feelings for more than one gender are probably suppressing some kind of urge to dally across the chart (i.e. they’re faking the binary), another part of me knows this is probably me extrapolating. I’ve had many, many, many friends tell me that they have no straight or no gay inklings whatsoever.

But my suspicion is that human sexuality is really a four or five dimensional grid, and that it’s all tied up with gender, and self-identification, and whether we’re poly or monogamous, and whether we’re trans or not, and all that with how horny we are. Like being white means you can’t see racism as well, or being male blinds you to sexism, maybe the privilege of being straight or even gay means you don’t get as good of a view of all those sliders going up and down. Whereas I’m constantly aware and interested in how we plot these things, obviously.

And what’s crazy is, I still don’t even really know where my section of the 5D graph lies! But it sure is fun to explore.

Being bi feels kind of like I get to play around in the big fat, gooey middle of all this, kind of like I’m the Little Prince, riding around the Milky Way with my net hooked over a shooting star, while nearly everyone else is stuck on Venus or Mars. And that’s pretty cool.