I want to start my answer to this question on Quora by making a confession. I’ve been an out bisexual for years, have had relationships with men and women and non-binary people publicly and sexually, and am even a bisexual activist who made a video in the #StillBisexual video series.

Given how gung-ho I am about digging the pole and the hole, you’d think I would be one of the last people in the world to hold doubts about whether he’s experimenting or is truly bisexual.

But even I sometimes still doubt myself!

So, yeah, you random guy or gal on Quora who had this question, I have some bad news for you: the discomfort you’re feeling is probably not something that a Quora answer can cure. It’s an emotional response to a lack of societal acceptance and knowledge about bisexuality, and you can’t conquer it by some kind of intellectual logic experiment.

The good news is, what you’re feeling is totally normal. All of us bi or bi-curious people go through the same thoughts, whether we wind up considering ourselves bi, hetero-flexible, fluid, or however we identify under the bisexual umbrella.

I mean, it’s kind of hard to feel like you’re truly bisexual in a world where:

And of course, for those of us who are trans, that just makes it even more confusing for the rest of the world to understand or believe our bisexuality. And if we go on a hormone regimen, those emotional and mental changes can create, change, or end feelings for people of certain genders. And body dysphoria can make us loathe the act of making love in a stereotypically “straight” way even if we might like people of many genders romantically.

And let’s not forget the sinister elephant in the room:

if you’re bisexual, you’ve likely experienced sexual assault by this point in your life.

In fact, you’re more likely to have experienced it than if you were exclusively gay or lesbian:

Even if you’re a young college age person who hasn’t gone through a lot of long-term relationships yet, if you’re bisexual, you may have experienced some bad stuff. Sadly, it’s not commonly known how frequently these things happen. And if it’s happened to you, it’s probably something that makes the answers you seek all the more confusing. 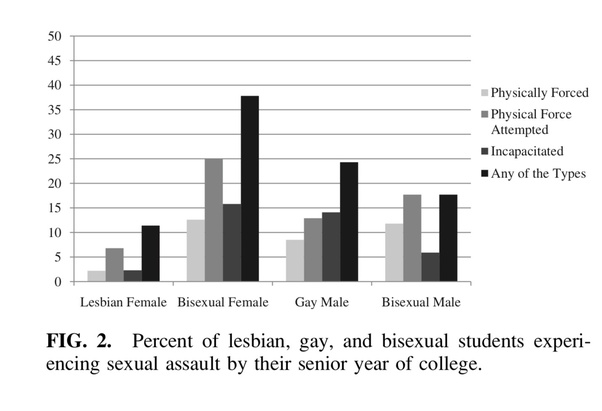 I can only speak for myself here. But as a male survivor of rape by another man, this had a profound impact on my relationships with other men. If you’re like me, you may be not only experiencing questions like “am I bi if I don’t like men and women the same?,” but you may also have a tough time truly experimenting with one gender, the gender that hurt you in the past.

You may be thinking “would I like men, or women, more if this didn’t happen to me?” Or you may be thinking quite the opposite: “Is my desire for men, or women, just a psychological attempt to rehash old wounds?” Either way, this can create an added barrier to exploration of your emotions, desires, and affections, especially since we don’t have communities and services set up to help us share these kinds of stories and fears.

Considering all these barriers to self-acceptance and the stigma that bisexuality still faces, I have a hunch that if you’re asking this question, you are indeed bisexual.

One thing that might help is to think of being bisexual as an umbrella term, with all the below different styles of living and loving falling under that term. Do any of the below match closely with how you think you feel? Then voila, you are definitely welcome to consider yourself bisexual! 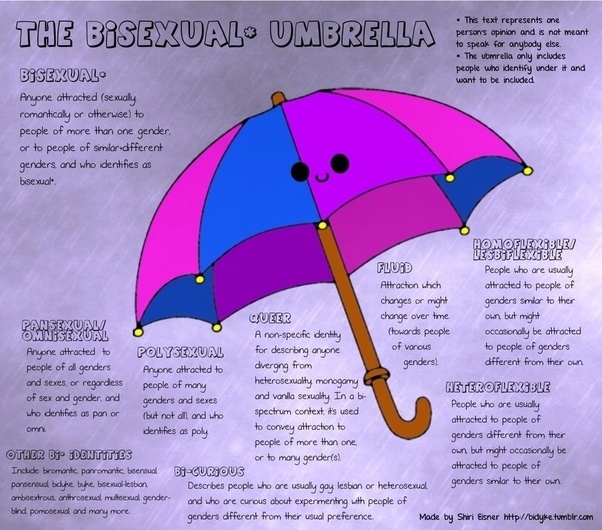 Now, I’ll admit that as a bisexual activist, I’m biased. I think it’s important for us to identify openly as bisexual if we can do so safely. There are a lot of unique challenges to our community that we won’t be able to face if we decide to forego adopting this name just because we can’t shake this societally-driven lack of clarity about where we stand.

On the other hand, I think many bisexuals would agree with me that there will be no penalties if you change your mind later.

If you want to wait and make a decision and continue to experiment for now, that’s fine. If you want to decide you are openly bisexual, but later change your mind, that’s okay too.

Either way, whether you are considering yourself an experimenter or a bisexual person, please make sure to take care of yourself! On a practical level, consider yourself to be as susceptible to both the risks and the rewards of someone who is an avowed bisexual:

I hope this helps! And remember, even some of the finest heroes of the bisexual movement later changed their minds and said they had merely been “experimenting” the whole time. And we still love them!

Though truth be told, they were never so cool later as when they’d been openly bisexual. 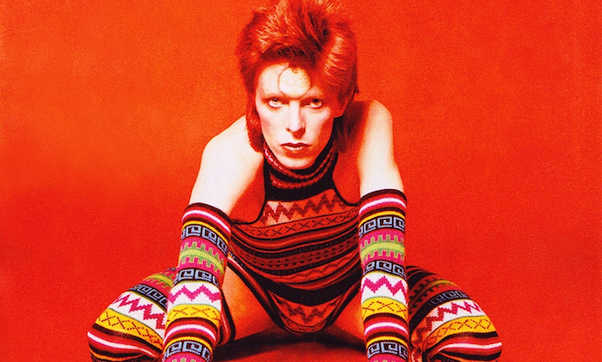